LEILA|ANDERSON
Stan Wannet (Netherlands, 1977) is a visual artist whose multi-media work includes electro-kinetic installations, sculpture, performance, video and net art. Stan and Leila are partners and have worked under the duo name Common Sense, creating work in SA, Europe and China.
For the exhibition catalogue of Stan Wannet's solo show at Chateau Oiron [2016,FR], I contributed a research text, a lateral lexicon, as a companion to his sculptures and installations. 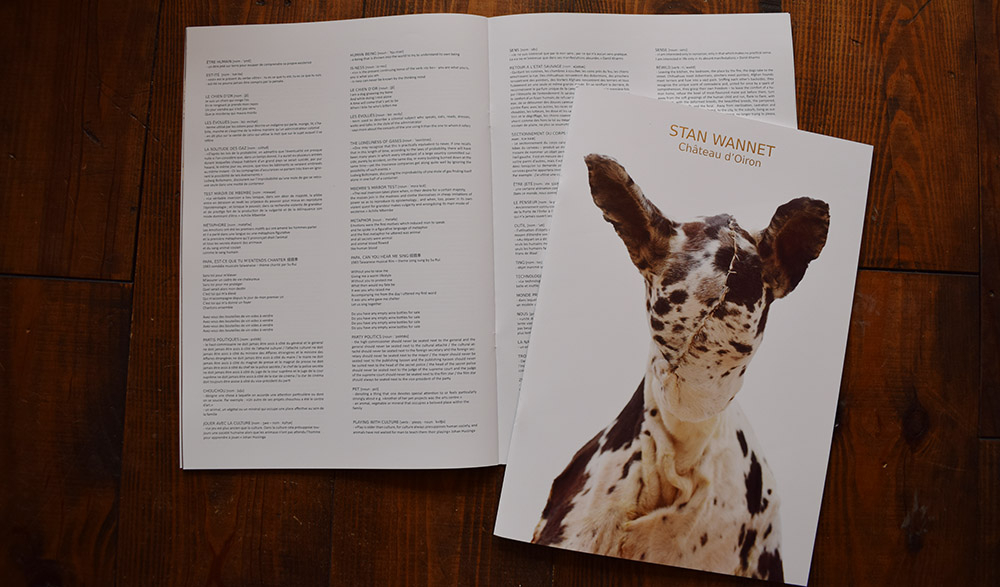 ANIMAL [noun: ˈænɪməl]
- an organism that has breath

BAKHTIN’S CARNIVAL [noun: ˈkɑːnɪvəl]
- If the powerful join the people in the streets, if they take hold of the hand of a stranger, they are for a moment only one more body in a world of bodies and the gold adorning their heads and necks is only metal, only an element.

BOLTZMANN’S BRAIN [noun: breɪn]
- A physical paradox named after statistical physicist, Ludwig Boltzmann, that states that, considering the probability of our current situation of self-awareness, it is more statistically likely that we, and all the world around us, do not exist in a physical sense, but are being imagined by a hypothetical brain. It is far less likely that so many self-aware entities exist independently, since the fundamental movement of physical matter is from a state of order to disorder, from organization to random chaos i.e. entropy.

BREAKFAST [noun: ˈbrɛkfəst]
- After breakfast, when they have gone down to the beach, I will throw a short rope over the crossbar of the window in this seaside apartment, slip my head into the swinging loop at its end and, as I look out over the Trieste sea, I will hang myself. (Also see:  STATISTICAL ANALYSIS OF SUICIDAL PHYSICISTS)

BEING [noun: ˈbiːɪŋ]
- an essential characteristic quality of something that exists

BUREAUCRAT [noun: ˈbjʊərəʊkræt]
- “Bureaucrats work on the categories of social existence in much the same way as sorcerers are supposed to work on the hair or nail clippings of their intended victims. Their religion is nationalism, and their actions, like those of most ritual practitioners, pragmatically aim to draw the powers of the reified cosmos into the pursuit of immediate goals.”  - Michael Herzfeld

BUREAUCRAFT [noun: bjʊəˈrəʊkrɑːft]
- The perceived conflation of bureaucratic and occult activities that gives rise to suspicion, paranoia and conspiracy theories. Belief in bureaucraft is heightened by the hidden, transparent flows of power at work in governance and administration occurring in post-socialist and Western neoliberal states.

BOERBOEL [noun: biː-əʊ-iː-ɑː-biː-əʊ-iː-ɛl]
Afrikaans. boerboel, lit. farmer - dog
- loyal and fearless comrade - will not hesitate to defend its loved ones to the death

CANTO III [noun: ˈkæntəʊ]
The land of tears gave forth a blast of wind,
that spewed itself in flame on a red sky,
and all my shattered senses left me. Blind,
like one whom sleep comes over in a swoon,
I stumbled into darkness and went down.
- ali Dante, 1437

MUSICAL CHAIRS [noun: ʧeəz]
- A metaphorical way of describing any activity where items, objects, people or politicians are repeatedly and usually pointlessly shuffled among various locations.

CRYPTOCOLONIALISM [noun: krɪpˈtɒkəˈləʊnjəlɪzm]
- The forces of colonialism operating under disguise in a country that entirely denies that it was ever anything other than completely independent of the Western project.

DASEIN [noun: ˈdaːzaɪn]
German: da  - there; sein -being
- referring to the experience of being that is peculiar to human beings (see: Heidegger)

DANS MACABRE [noun: dænz məˈkɑːbrə]
- Late-medieval allegory on the vain glories of earthly life. The omnipresent possibility of sudden and painful death increased religious desire and evoked a hysterical desire for amusement. Standing with mouths agape, the living looked onto the dance floor, awaiting their turn to be plucked from the crowd and swirled across the room in the arms of the grinning dead.

DOMESTIC [noun: dəʊˈmɛstɪk]
The artist typically resists association with domestic animals and their symbolic inference of obedience to a higher authority, preferring to imagine himself as an unrestrained social and intellectual creature e.g. tiger, rhinoceros, ant, unicorn.

LIVE ENCOUNTER WITH AN (IN)ANIMATE OBSTACLE [verb: ɪnˈkaʊntər]
- You can’t pass by without being confronted by its implacable thingness, its refusal to reassure you that it is either with or without life and the grotesque familiarity of its features, which could be yours, which have space for you to project yourself into, features that are ridiculous and uncanny and crafted.

ENSOULMENT [verb: ɪnˈsəʊlmənt]
- without the belief in ensoulment (bezeelung) artefacts would just be objects and we would walk right past them without even bothering to look at them

EMPATHY [noun: ˈɛmpəθi]
- formerly a word considered to be dangerously close to sentimental, empathy has had a come-back, thanks in part to the latest developments in primatology and evolutionary biology
- what the other feels for you, to be gleaned from the cryptic behaviour of the other

ENTROPY [noun: ˈɛntrəpi]
-  You ever drop an egg and on the floor you see it break?
You go and get a mop so you can clean up your mistake.
But did you ever stop to ponder why we know it's true,
if you drop a broken egg you will not get an egg that's new
M.C. Hawkins

FERAL FIGURATIONS [adjective ˈfɪərəl ˌfɪgjʊˈreɪʃənz]
- not characters, not subjects, not depictions of existing individuals
- figurative sculptures that have escaped the domestication of fixed meaning

GAME THEORY [noun: geɪm]
- The rules of engagement appear fixed, but are in fact fluid, matching the incomprehensible worlds in which they are played. There are no possible winners, nor losers, gains or losses: the game is to keep the game going. The only rule, in order to play the game, is to play the rules.
GROTESQUE HYBRID [adjective: grəʊˈtɛsk]
- That moment, late at night, when it is no longer clear whether the people around you are human or a blurrier species – nocturnal shape-shifting creatures that speak a language of howls, slurs and hoots, merging their flesh in every swaying motion.

HUMAN BEING [noun: ˈhjuːmən]
- a being that is thrown into the world to try to understand its own being
IS-NESS [noun: ɪz-nɛs]
- “Is” is the present continuing tense of the verb "to be": you are what you is, you is what you am.
- Is-ness can never be known by the thinking mind

LE CHIEN D’OR [noun: ʃjɛ̃]
I am a dog gnawing my bone
And while doing I rest alone
A time will come that’s yet to be
When I bite he who’s bitten me

LES ÉVOLUÉS [noun: lez- əvɔly]
- term used to describe a colonial subject who speaks, eats, reads, dresses, walks and talks in the style of the administrator
- says more about the conceits of the one using it than the one to whom it refers

THE LONELINESS OF GASES [noun: ˈləʊnlɪnəs]
- “One may recognize that this is practically equivalent to never, if one recalls that in this length of time, according to the laws of probability, there will have been many years in which every inhabitant of a large country committed suicide, purely by accident, on the same day, or every building burned down at the same time—yet the insurance companies get along quite well by ignoring the possibility of such events.”
- Ludwig Boltzmann, Lectures on Gas Theory, discussing the improbability of one mole of gas finding itself alone in one half of a container

MBEMBE’S MIRROR TEST [noun: noun ˈmɪrə tɛst]
- The real inversion takes place when, in their desire for a certain majesty, the masses join in the madness and clothe themselves in cheap imitations of power so as to reproduce its epistemology; and when, too, power in its own violent quest for grandeur makes vulgarity and wrongdoing its main mode of existence.
- Achille Mbembe

PET [noun pɛt]
- denoting a thing that one devotes special attention to or feels particularly strongly about e.g. ‘Another of her pet projects was the arts centre.’
- an animal, vegetable or mineral that occupies a beloved place within the family

PLAYING WITH CULTURE [verb: ˈpleɪɪŋ - noun: ˈkʌlʧə]
- “Play is older than culture, for culture, however inadequately defined, always presupposes human society, and animals have not waited for man to teach them their playing” - Johan Huizinga

REWILD [verb ˌriːˈwaɪld]
- Leaving the kitchen, the bedroom, the place by the fire, the dogs take to the street. Chihuahuas meet Dobermans, Pinchers meet Pointers, Afghan Hounds meet Terriers and fuse into a vast pack. Sniffing each other’s backsides, they recognize the unique scent of comraderie and, united for once by a spark of comprehension, they grasp their own freedom – to leave the comfort of a human home, refuse the bowl of meat-flavoured maize put before them, turn away from the soft graspings of the human child and run, flank to flank, with the others, with the deformed breeds, the beautified breeds, the pampered, the fighters, the fluffy and the feral.  Away from sterilization, castration and de-clawing, the dogs run to the forest, to the city, to the suburb, living as outlaws, in defiance of their evolutionary inheritance, no longer trying to please, no longer submitting to any but their own species.

SENSE [noun: sɛns]
I am interested only in nonsense; only in that which makes no practical sense. I am interested in life only in its absurd manifestations. ― Daniil Kharms

SEVERING OF THE CORPUS COLLOSUM [verb: sɪˈvɪərɪŋ – noun: ˈkɔːpəs collosum]
- With the severing of the corpus collosum - the bundle of nerves that connect one lobe of the brain with the other - an unusual gap in perception appears: the patient is able to name an object perceived by the right eye, but not one perceived by the left eye. This object she is able to draw on paper or select from several others, but the word for what it is cannot be retrieved. When asked why she has drawn a picture of a spoon, for example, her left brain will immediately come up with an explanation that keeps the meaning of the world in order.
e.g. I used a spoon to break an egg at breakfast.

THROWNNESS [noun: ˈθrəʊnəs]
- a kind of alienation that human beings struggle with
Into this world we're thrown / Like a dog without a bone

THE THINKER [noun ðə ˈθɪŋkə]
- Formerly known as The Poet, the figure was supposed to sit in front of the Gates of Hell at the entranceway of the Museum of Decorative Arts in Paris, which never opened its doors.

TING [noun: tɪŋ]
- inanimate object that is imbued with life by a live maker

TECHNOLOGY [noun: tɛkˈnɒləʤi]
- Technology does not want to remain utilitarian. It wants to become art, to be beautiful and useless.
– Kevin Kelly

UMWELT [noun: ʊmvɛlt]
- in which the relationship of each specific species to its environment defines a unique model of the world

US [pronoun: ʌs]
- a classifying unit of flexible characteristics e.g. The coalition emerges out of your recognition that it’s fucked up for us. I don’t need your help. I just need you to recognize that this shit is killing you, too, however much more softly, you stupid motherfucker, you know? – Fred Moten

THE WILD [noun: waɪld]
- an environment that is the opposite of an art gallery

ZOO [noun zuː]
- The animal scrutinises him across a narrow abyss of non-comprehension. This is why the man can surprise the animal. Yet the animal — even if domesticated — can also surprise the man…  Thus, a power is ascribed to the animal, comparable with human power but never coinciding with it. - John Berger